Cottages4Holidays-uk.com - one of the largest collections of holiday cottage rentals in the UK...
Home  /

The Cotswolds is the name given to the hills that run between Bath and Chipping Campden. The Cotswolds crosses several counties Somerset, Wiltshire, Oxfordshire and Gloucestershire.  The Cotswolds are a popular location for tourism as well as being a sought after location for holiday homes and main properties.

The Cotswolds have been home to humans for thousands of years and the remnants of prehistoric worship can be still seen today.  The Romans occupied the area and left their marks in places like Cirencester and Bath (famous for its Roman Baths).  The Saxons built many churches and settlements in the Cotswolds.

The Middle Ages were prosperous for the area as the local woollen industry flourished and today you can still find markets based on this early trade still surviving. The prosperity of the Cotswolds cloth industry continued to flourish in the 16th and 17th centuries.  This wealth is reflected in the beautiful manor houses built from limestone, the market halls and chocolate box cottages in the area.

The Kennet and Avon Canal, now mainly used for tourism and pleasure boating delivered the economic benefits of the industrial revolution.

The Cotswolds are an area of natural beauty with rolling hills and valleys.  If you enjoy walking then The Cotswold Way is worth a look.  It is a long distance footpath of n 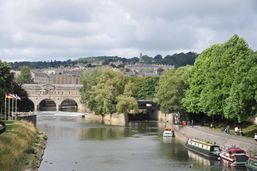 early 100 miles.  It wanders between Bath and Chipping Sodbury.  It passes through popular locations such as Stroud, Painswick, Birdlip, Winchcombe, Stanway and Broadway. During its higher points it the route overlooks the Severn and Avon for much of its length.  At the mid-point of the Cotswold Way you can see the old Ordnance Survey triangulation station (now obsolete due to Sat Nav)

The canals and waterways are well worth a look and can offer delightful walks and holiday destinations in their own rights.

Many properties in the area have been built with the local Cotswold Stone, so much so that some areas of the hills are claimed to be almost hollow.  You can see why as the cottages built from the local do fit very well with their thatched roofs and local environment.  You will see examples all over the area from large cities such as bath to smaller remote villages.

There is plenty to do for the whole family in the Cotswolds.  Cotswold Wildlife Park is just one example which includes Bats, Reptiles, Insects, Adventure playground, Brass rubbing centre and a Narrow gauge railway.  All of this is set in Victorian manor house and 200 acres of gardens.

Sudeley Castle, Hailes Abbey and Broadway are great locations to explore the history of the Cotswolds.  Sudeley Castle in Winchcombe  provides great insight as to how royalty lived as at least 6 English kings and queens have stayed there over the hundreds of years it has been in existence.

You can view the ruins at Hailes Abbey for a peaceful couple of hours and to see a typical Cotswold Village, Broadway is an idyllic location. Arguably Chipping Campden is the loveliest village in the Cotswolds, historically a market town with plenty of local history